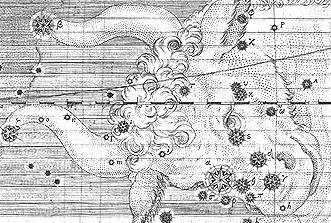 We have now arrived at perhaps the most illustrious of all celestial atlases, and the centerpiece of this exhibition, Bayer's Uranometria. This forerunner of all later star atlases contains 51 star charts, one for each of the traditional 48 Ptolemaic constellations, plus a chart of the newly discovered southern skies, and two planispheres. The maps are engravings, rather than woodcuts, and quite large, being over 37 cm. across. The images reproduced here and elsewhere in the catalog ably demonstrate one notable feature of this atlas: the sheer beauty of the plates. There is no simple explanation for this esthetic leap forward. The artist clearly found some inspiration in the De Gheyn engravings in the Aratea published by Hugo Grotius in 1600, but most of Bayer's constellation figures are quite different from De Gheyn's, and generally more attractive. Many have no known prototype whatsoever.

But the most significant feature of this book is that it is an atlas; a collection of maps, rather than of pictures. Each plate has a carefully engraved grid, so that star positions can be read off to fractions of a degree. These positions were taken, not from Ptolemy's catalog, but from the catalog of Tycho Brahe, which had circulated in manuscript in the 1590s, but which was only printed in 1602.

Another important feature of the atlas was the introduction of a new system of stellar nomenclature. Bayer assigned Greek letters to the brighter stars, generally in the order of magnitude, so that the bright star in the Bull's eye became alpha Tauri (and the brightest star in the Centaur became our familiar alpha Centauri.) These letters were placed on the charts themselves, and also in a table that accompanied each chart. For more information on Bayer's nomenclature system, with discussion of Andromeda, see the next exhibit item.

The Bayer discussion continues on the next page.