9a. Continuation of Johann Bayer, Uranometria, 1603 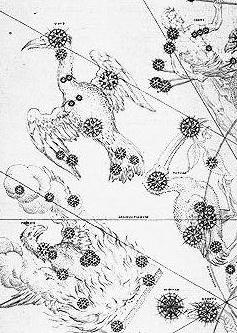 Yet another novelty of Bayer's Uranometria was the inclusion of a plate of the southern stars discovered by sixteenth-century voyagers. These were formed into twelve new constellations, including the Phoenix, the Toucan, and the Bird of Paradise, all of which can be seen in the detail shown. Bayer took the southern star positions and constellation names from the catalog of Pietr Dirksz Keyser.

One of the odd features of the Uranometria is that Bayer chose, for some reason, to show many of the human constellations from the back, even though traditionally they all face us. This had the unfortunate result of rendering many of the traditional star descriptions obsolete, since the "star in the right shoulder" of a figure who faces towards us becomes a star in his left shoulder when he turns the other way. We see a good example of this in Bayer's figure of Aquarius.

Discussion of Bayer continues in the next exhibit item, Bayer's Explicatio, 1654.