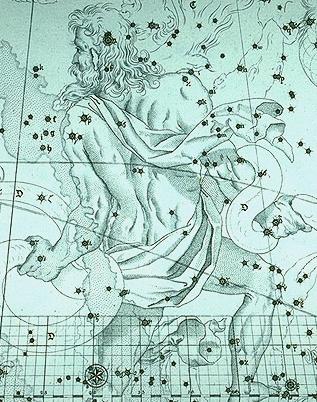 Although many astronomers praised the Flamsteed atlas for its accuracy, others were unhappy with the unwieldy size and inelegant plates, and this dissatisfaction is made evident by John Bevis's decision in 1745 to publish a new English star atlas, and to base it on Bayer, rather than Flamsteed. Bevis succeeded in having the plates engraved for his atlas, and even managed to have a star catalog printed. But the bankruptcy of his printer resulted in the plates being sequestered by the courts, and the Bevis Uranographia, as it was to have been called, was never published. Fortunately, a number of impressions were printed from the plates before they disappeared, and nearly all of these pre-publication sets--some sixteen in all--are still preserved in various libraries around the world.

When one compares the Bevis atlas to Bayer's Uranometria, it is apparent that Bevis followed the plan of the Bayer atlas excactly. There are the same number of plates, of the same size, and each covers the same area of the sky. The constellation figures are also stylistically identical. But the two are not the same. Bevis has more stars, and more accurate positions for those stars. He also took pains to include the many new or variable stars that had been recently discovered, as well as the nebulous objects. There are in fact nine Messier objects on the Bevis charts (including M1, which Bevis discovered), and five of them had never before appeared in a star atlas.