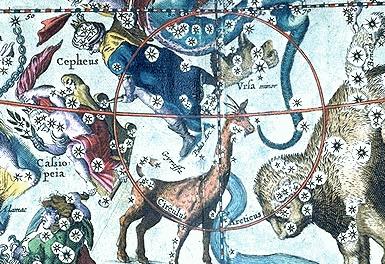 Many of the innovations in celestial cartography first appeared on star globes, rather than flat maps. The globes of Gerard Mercator (1551), Petrus Plancius (1598) and Willem Blaeu (1598 and 1616) were all very important in determining style, and introducing new constellations and methods of nomenclature. 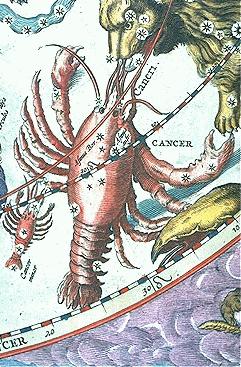 For example, it was the 1598 globe of Plancius that first utilized the new star positions of Tycho Brahe and introduced the new southern constellations, five years before Bayer incorporated both features into his Uranometria. However, these globes are so scarce (in the case of the Plancius 1598 globe, no longer extant at all), that it is difficult to assess their role in helping change the face of celestial maps in the seventeenth century.

Perhaps the best surrogate for viewing one of these grand globes is to look at the two large celestial planispheres that were published in Cellarius's sumptuous Harmonia macrocosmica. These maps capture some of the scale of the globes; if one of the planispheres were wrapped onto a sphere, it would produce a globe about 26 cm in diameter, or 2/3 the size of a typical Blaeu/Plancius globe. The style of Cellarius's maps seems to have been derived from the globes of Plancius and Blaeu. For example, Plancius had shown Cancer as a lobster, and Cellarius adopts the same convention; it is quite different from the Cancer of Bayer's Uranometria. In fact, Plancius had invented a new constellation, Cancer Minor, the little crab, and Cellarius included that also (see left), along with a number of other newly-coined Plancius constellations. Some of the northern constellation figures, such as Cepheus and Bootes, are dressed in warm winter clothing; this was another novelty first introduced on the early Blaeu globes.