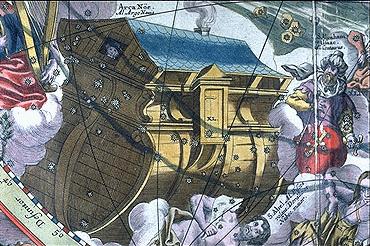 The Golden Age of the Celestial Atlas

An exhibition of celestial atlases requires little justification. These are among the most beautiful scientific books ever published, capturing the sweeping grandeur of the heavens, superimposed with constellation figures, in a grand and monumental format. The period from 1603 to 1801, which comprise the inner markers of this exhibition, produced the most beautiful star atlases ever published, and one does not have to be an astronomer or a star gazer to appreciate their heavenly grandeur.

But however much we appreciate celestial atlases as works of art, they were first and foremost works of science. The purpose of a star atlas was to provide the positions of the visible stars as accurately as possible, using a consistent scheme of projection, and in a convenient format. A star atlas was not a guide to star-gazing, but was intended to be used by the working astronomer, as a backdrop on which to plot the changing positions of planets, comets, and the moon. The best atlases were produced by truly great astronomers, such as John Flamsteed, Johannes Hevelius and Johann Bode, and were based on the best available observations, usually their own. As observations became more accurate, the star atlases likewise improved in accuracy. As new celestial objects were discovered, such as nebulae, variable stars, and new stars, they began to find their place on the maps. In an exhibition such as this, one can follow, and admire, this evolution.

It is not really necessary to organize an exhibition such as this one around a theme, but as we analysed the various atlases and prepared commentary, one fact became noteworthy, and that was the longlasting impact of the star atlas of Johann Bayer. Bayer's Uranometria was published in 1603, and it has always been recognized as a milestone work, because of the the beauty of its plates, its utilization of the star catalog of Tycho Brahe, and its institution of a system of star nomelclature that is still in use. What has not been generally recognized is how Bayer's atlas became the standard reference point for all later atlases. Subsequent astronomers would invent new constellations and adopt new systems of projection, and utilize radically different artistic styles. But the presence of Bayer is always there, and the Uranometria is always the implicit standard of comparison. So for this exhibition, we have made the comparison explicit, and we have found it instructive to regularly compare subsequent atlases with their ultimate progenitor. It seems to provide an additional thread of continuity, and it is a thread that is not at all superficial, but deeply embedded in the evolution of the genre.

The other reason for adopting Bayer as a reference frame is that it allows us logically to expand the exhibition beyond the obvious dates of 1603 to 1801. The Uranometria was the first modern star atlas, but it had ample precedent. There were many earlier books that provided star catalogs, star charts, and constellation figures, and it is instructive to view these with the Uranometria in mind, since Bayer drew on many of these works. We have tried to include a representative sample of such works to provide a backdrop against which we can view Bayer's masterpiece, beginning with the first illustrated book of constellation figures, published in 1482.

An exhibition of the great celestial atlases would normally end in 1801, when Johann Bode published his Uranographia, the most monumental of all star atlases, in plate size and number of stars depicted. It marks a logical endpoint, because after Bode, the star atlas, as a genre, changed direction, and split into several strands, one aimed at the professional astronomer, the other at the amateur. The ideal of one large book that contains everything visible among the stars, overlaid with constellation figures, was simply no longer feasible. We exhibit some of these not-so-grand atlases, to demonstate the transformation, and also because the focus on Bayer allows us a second natural stopping point, in 1843. For in that year Argelander published a Uranometria Nova, a new Uranometria, which paid explicit homage to the original Uranometria, even adopting in ghostly outline the very constellation figues that Bayer had used, while at the same time establishing the shape of the professional star atlas of the future. It provides a fitting conclusion to, and demonstration of, Bayer's long-lasting legacy.