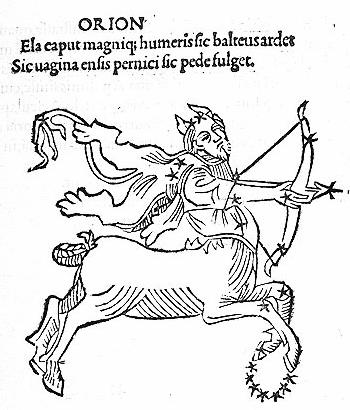 Besides the Poeticon of Hyginus, the other major ancient literary source on the constellations was the Phaenomena of Aratus. Aratus lived in the third century B.C, and his Phaenomena was a poem, based apparently on a lost work of Eudoxus of Cnidos. The style of Aratus is quite different from that of Hyginus; it is not at all concerned with the positions of the stars, and it is much more lyrical, as when he says: "Aslant beneath the fore-body of the Bull is set the great Orion. Let none who pass him spread out on high on a cloudless night imagine that, gazing on the heavens, one shall see other stars more fair."

The Phaenomena was written in Greek, but it was translated into Latin at least three times in antiquity, by Cicero, Germanicus, and Rufus Avienus. In an ideal Renaissance, Aratus would have been printed before Hyginus, but as it turned out, the editio princeps of Aratus was in this beautiful Aldine edition of 1499. Aratus also should have merited his own illustrations, but instead Aldus used copies of the Ratdolt Hyginus edition of 1482. Not much care was taken with the placement of the woodblocks, for the figure of Orion shown here was actually printed from the woodblock of Sagittarius.

There is one other illustrated edition of Aratus in the exhibition: