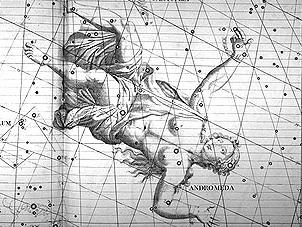 John Flamsteed was the first Astronomer Royal of England and presided over the building of Greenwich Observatory. He was a dedicated observational astronomer, and his "British Catalogue" of stars, finally published in 1725, well after his death, brought stellar astronomy to a new level. His star atlas, published four years after the catalogue but in development for over twenty years, was based on Flamsteed's new, more accurate observations, and that fact, coupled with its impressive size (it was the largest star atlas that had ever been published) immediately vaulted it into the select ranks of the great celestial atlases.

One of Flamsteed's principal motives in publishing the atlas was to correct what Flamsteed felt were serious errors in Bayer's depiction of the constellation figures. Bayer had reversed many of the figures, showing them from the rear instead of the front, and these new positions contradicted the traditional star descriptions (i.e., Ptolemy's "star in the right shoulder" of Orion had become, in Bayer's rendering, the star in the left shoulder). Since most stars were still referred to by their Ptolemaic labels, Flamsteed objected to Bayer's revisions as introducing unnecessary confusion into stellar astronomy, and so all his figures follow the traditional descriptions exactly, as we can see in comparing the Orion figures in Flamsteed and Bayer.

The Flamsteed atlas was welcomed because of its unprecedented accuracy, but it did suffer from some deficiencies. It was, for one thing, almost too big to use, with its twenty-four-by-twenty inch plates. It also lacks the aesthetic quality of both the Bayer and Hevelius atlases. While Andromeda is graceful enough (see top left), Aquarius is almost grotesque, especially when compared with the artful Aquarius in Bayer's Uranometria. What Flamsteed's atlas needed most was a new edition, with reduced and more pleasingly drawn plates. Astronomers in France would fill this need in 1776, and the French version of the Flamsteed atlas, the Atlas celeste would immediately become the standard in the field.