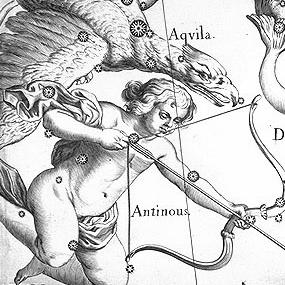 The Hevelius Firmamentum was the first star atlas to rival Bayer's Uranometria in accuracy, utility, innovation, and influence. Hevelius was perhaps the most active observational astronomer of the last half of the seventeenth century. His star atlas is notable for many reasons. It contains fifty-six large, exquisite, double-page engraved star maps. The star positions for the charts were derived from Hevelius's own star catalog, based on his own observations, which was first published along with the atlas. It is unique among the Grand Atlases in choosing to depict the constellations as they would appear on a globe, that is, from the outside looking in, rather than from a geocentric point of view, as Bayer and most others adopted. So Aquila and Antinous swoop down to the right, rather than to the left as in Bayer. A comparison of two details of Auriga from Hevelius and Bayer reveal the differences in orientation of the two atlases.

A further innovation of Hevelius was in the depiction of the southern stars. Bayer had based his southern polar map on the observations of Keyser and Houtman, and although the star positions were very inaccurate, no one had improved upon them in the succeeding century. However, in 1676 Edmond Halley had journeyed to St. Helena in the South Atlantic and had observed the positions of 341 southern stars, and a catalog and map were published in 1679. However, the new positions first became widely known when Hevelius used Halley's chart as the basis for his own southern map. A comparison of corresponding details of the Bayer and Hevelius southern maps shows the improvement.

There were four atlases that were directly inspired by Hevelius:

You may go directly to any of these atlases, or click on the Next button to visit them in order.