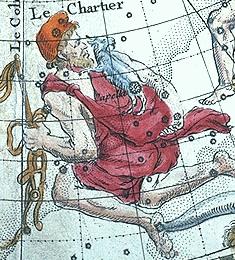 La Hire was a notable French astronomer, and his two planispheres of the northern and southern stars were published as individual sheets (although they were included in many French atlases throughout the eighteenth century). Our copies are quite attractive, partly because of their hand-coloring, and partly because of the beautiful constellation figures. It is intriguing then to realize that most of the constellation figures are ultimately derived from the prototypes in Bayer's Uranometria. Auriga (above right, Le Chartier on the French map) and Perseus (below right) in particular have changed little since their first appearence in 1603. It is interesting that the French astronomical community maintened an affinity for Bayer until halfway through the eighteenth century, while the Germans, who might have been expected to defend their countryman strongly, were quick to abandon him for Hevelius (see next item).

To see a detail of Andromeda and Cassiopeia from the northern map, click here.