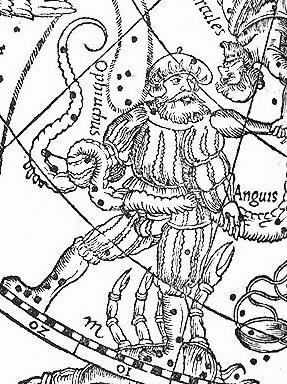 Albrecht Durer produced the first printed star charts in 1515. One chart or planisphere showed all the northern constellations; the other woodcut depicted the southern ones. The positions of the stars were accurately fixed (according to Ptolemy's catalog), and the figures were artistically portrayed, in a classical style that bore no resemblance to any of the Hyginus woodcuts. Durer also chose to illustrate the constellations as they would appear on a globe, that is, from the outside.

The Durer planispheres are quite scarce and were never included in a printed book. Perhaps the next best thing are two charts by Johannes Honter, cut in 1532 and included in the first collected edition of the works of Claudius Ptolemy. Although clearly inspired by Durer, Honter made some significant changes. His maps show the stars as seen from the earth, rather than from the outside, as they were shown on Durer's charts. Honter also departed from Durer's classical style by dressing some of the constellation figures in contemporary clothing. We see at right a detail from the northern map, showing Ophiuchus, the Serpent Bearer, in distinctly non-classical garb. A detail from the southern map shows Orion and Taurus.

Durer's maps were accurate enough that you could have used them to find known stars or map new ones. If you had wished to use Honter's maps for such a purpose, you would have had to overcome a substantial flaw; the entire coordinate system of both charts was accidentally misplaced by nearly thirty degrees!