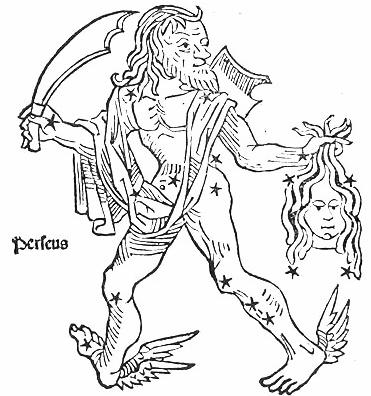 The Poeticon Astronomicon was one of the primary ancient literary sources on the constellations. In the Renaissance the work was usually attributed to the Roman historian C. Julius Hyginus, who lived in the first century B.C., but we now know it was probably composed by some other Hyginus at a later date. The order of the constellations follows that of the catalog in Ptolemy's Almagest, so the work may date from the second century A.D or later.

The Poeticon was first published in this edition of 1482. The printer Erhard Ratdolt, who had recently moved from Augsburg to Venice, commissioned an elegant set of woodcuts of the constellations. The figures are somewhat crude but are very lively, and viewers have always found them quite charming. Although star positions are indicated, they have little to do with either the positions described by Hyginus, or the actual positions of the stars in the sky. Thus it is really not accurate to call these star maps, or the Ratdolt publication a star atlas. But when true star maps did begin to appear in print in the sixteenth century, it was the set of Ratdolt illustrations that provided the initial prototypes for the constellation figures.

The woodcut reproduced here is that of Perseus, holding the newly-severed head of the Gorgon. Two other particularly striking constellations are Orion and Aquarius.