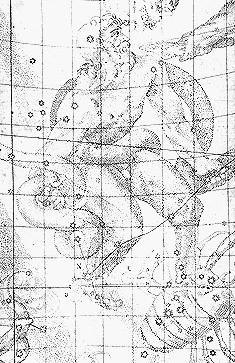 The principal function of the early star map was to provide a reference framework for plotting the motions of the planets. Bayer's Uranometria accomodated this need by laying out a well-divided grid within the sixteen-degree width of the zodiac. We get our first glimpse of a Bayer chart in action in Johannes Kepler's book on the new star that appeared in 1604 in the constellation Ophiuchus. Ophiuchus is not a zodiacal constellation, but the planets do move through the Serpent-Bearer's feet on their way from Scorpio to Sagittarius. Kepler was greatly impressed by the appearance of the new star, or nova, because it coincided in time and place with a triple conjunction of the planets Mars, Jupiter, and Saturn. The chart that Kepler published of Ophiuchus (left) shows both the nova (N) and the positions of the planets at two separate times.

It is interesting to compare Kepler's map to Bayer's. It is evident that Kepler's figure and even his star positions were taken from Bayer. But we can also see that Kepler was an early critic of Bayer's decision to show Ophiuchus from the back. And we can see why, because the two bright stars that traditionally formed the right shoulder of the Serpent-Bearer are depicted by Bayer in the left shoulder. Similarly, the nova would be described as being in the left foot of Bayer's figure, but in the right foot on a traditional map. So Kepler turned the figure around. But it is noteworthy that it is still very much Bayer's figure, even if now seen from the other side.

For a detail of Kepler's depiction of the nova and the triple conjunction, click here.