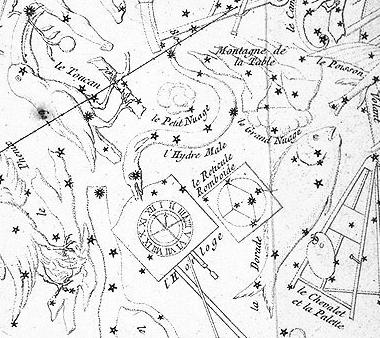 In 1751 the French astronomer Lacaille went to South Africa and recorded the positions of over nine thousand stars, and he completey refurbished the format of the southern skies. He added fourteen new constellations, and divided up Argo into three smaller ones, which means that we owe seventeen of our modern constellations to Lacaille. He announced his new constellations in a chart of the southern skies, first published here, in the Memoires of the French Academy of Science. In this detail of the map, we can see l'Horologe (Horologium), Montagne de la Table (Mensa), le Reticule (Reticulum), and le Cheval et l'Palette (Pictor).

The remaining new constellations, Microscopium and Antlia, can be located on a view of the entire map.

It is interesting to compare a detail of this image to the corresponding section from Johannes Bayer, Uranometria, 1603, which contained the original map of the southern skies.