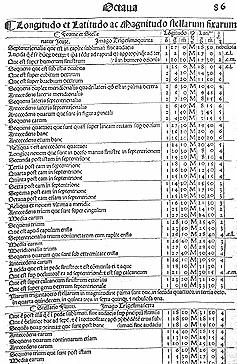 Although star maps are the focus of this exhibition, it is important to recognize that star maps were based on star catalogs, and the principal catalog used for star maps until 1600 was that compiled by Claudius Ptolemy in the second century A.D. This catalog contains the positions of 1028 stars, and it first appeared in print in this edition of Ptolemy's authoritative Almagest, the basic ancient work on astronomical theory.

The page displayed shows the stars in the constellation Orion. In the next to last column Ptolemy assigns a magnitude to the stars, with "1" being the brightest. In a detail of the catalog we can see, near the end of the Orion entry, a description of a first-magnitude star--this is Rigel, the bright star in the heel of Orion.

If we compare Ptolemy's catalog of the stars of Orion with the image of Orion in the 1482 edition of Hyginus, we see there is absolutely no correlation at all. Thus it is not strictly correct to call the Hyginus illustrations star "maps." Nevertheless, they are the visual medium out of which true star maps would evolve in the mid sixteenth century.