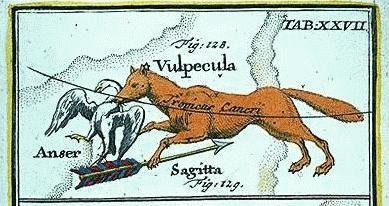 Between 1723 and 1731 three interesting and quite different star atlases were published in Germany by persons who are otherwise practically unknown, and they comprise the next three items in the exhibition. Interestingly, each of the three adopted the style of Johannes Hevelius. The first to appear was this atlas of Johann Rost, who is known only as an Nuremberg astronomer. His atlas is striking because, at least in our copy, the engravings are handcolored. There are fourteen plates, each one usually divided into three panels, so that we have forty-one constellation maps all together. At the left is a greatly enlarged view of Vulpecula, which occupies the top third of one of the small plates. Even without coloring, the star positions are quite inconsequential, and the coloring makes them practically disappear. The inclusion of Vulpecula and Lacerta (which appears on the bottom of this same plate) is one of many clues that Rost took the Hevelius atlas as his starting point, since Hevelius invented these constellations.