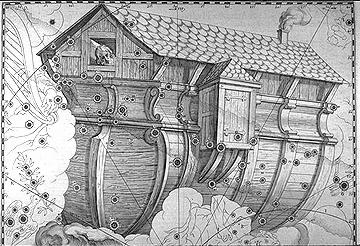 Schiller's Christian Starry Heavens was aptly named, for in this atlas, Schiller replaced all of the pagan constellations with Christian counterparts. The twelve zodiacal constellations, for example, were renamed for the twelve apostles; so that Taurus the Bull, for example, became St. Andrew. Other notable replacements include The Red Sea for the river Eridanus; the Ark of Noah for the Ship of the Argonauts (right), and the Sepulcher of Christ for Andromeda.

Each plate in Schiller's atlas is slightly smaller than the corresponding plate in Bayer's work, but the plates are in the same order. Opposite each plate (rather than on the verso as in Bayer) is a printed table, where the stars are identified by Arabic numbers, rather than Bayer letters. Schiller also gives two descriptions for each star, one with reference to the pagan constellation figure and one for the new Christian replacement.

The Schiller description continues on the next page.