Schiller's decision to depict the stars in his atlas as viewed from the outside, as they would appear on a globe, was apparently not easily arrived at, for it was the reverse of the convention used by Bayer. (The fact that Bayer turned some of his figures around should not confuse the issue; although portrayed from the back, they were still pictured as seen from the earth.) In an attempt to appeal to those astronomers who preferred geocentric charts such as Bayer's, Schiller adopted an unusual procedure while printing his atlas. After the star positions had been engraved on the plates, but before the constellation figures had been added, he had the printer produce what are called counterproofs, where a printed sheet is pulled from a plate and immediately placed, while still wet, on another sheet, and run through the press again. The second sheet retains a mirror image of the first. Schiller produced an entire edition of counterproof sets, and gave it a separate title: the Concave Christian heavens. 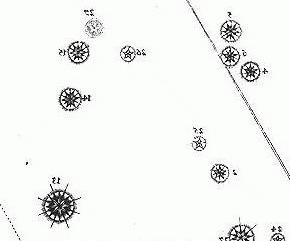 We show two illustrations: the first, on the left, is a detail of the constellation Sepulcher from the main atlas--Sepulcher was Schiller's replacement for the traditional Andromeda. On the right we see the corresponding detail from the same plate of the concave atlas; it is a mirror image of the first, but it lacks the constellation figure. Notice that the numbers of the stars are reversed on the counterproof. One can also observe, in addition to the stars, a nebulous spot (no. 27) at the top. This is the first appearance anywhere of the great nebula of Andromeda, which had been discovered only a few years before.

If we now compare these two images to the same section of the Bayer plate of Andromeda, we notice that the stars positions are not the same. Schiller corrected positions where appropriate, added stars that were omitted from Bayer, and in general felt free to improve the Uranometria. He was assisted in this by none other than Johann Bayer himself, who was apparently quite enthusiastic about Schiller's project. All this serves to remind us that, whatever one thinks of Schiller's attempted renovation of the constellations, his atlas was, by all astronomical standards, quite accurate and up to date.