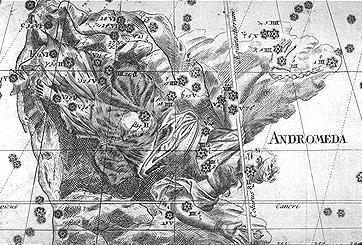 Little is known about Corbinianus Thomas, a Benedictine monk at Salzburg, but his Firmamentum is one of the unsung treasures of celestial cartography. It contains 54 modestly-sized etchings of individual constellations, but the small plates exude considerable charm. The plate of Andromeda is the most successful, with the billowy Baroque drapery interacting dramatically with the differently shaded rock behind. Some of his other constellation figures are also quite unusual. His Capricorn is severely truncated, indicating in a striking visual fashion that Capricorn is sandwiched in the sky between Sagitarius and Aquarius. Thomas also banded the region of the zodiac, which is quite an improvement over the uniform darkening of Bayer. 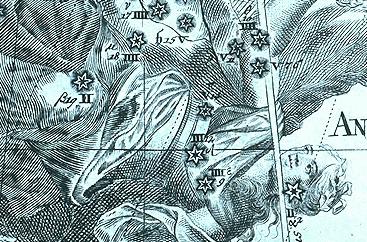 Thomas was one of the first celestial cartographers to devote a separate plate to Camelopardalis, a constellation that first appeared on globes around 1600, but which usually in star atlases had to share billing with Cepheus or Cassiopeia. And Thomas was the first cartographer to provide individual plates for some of the southern constellations, such as Indus and Pavo which customarily were shown only as a small part of a single plate or planisphere centered on the south celestial pole.

As we see in a detail of Andromeda on the right, Thomas used an interesting nomenclature system: Bayer Greek letter, Roman numeral for magnitude, and Arabic numeral for reference to a star catalog. This system originated on the large globes of Coronelli, as indeed did many of Thomas's figures.

Thomas did invent one new constellation of his own, Corona Firmiana, to honor his patron, the archbishop of Salzburg, but it was never used again. Nor, alas, was most of the rest of Thomas' charming atlas.